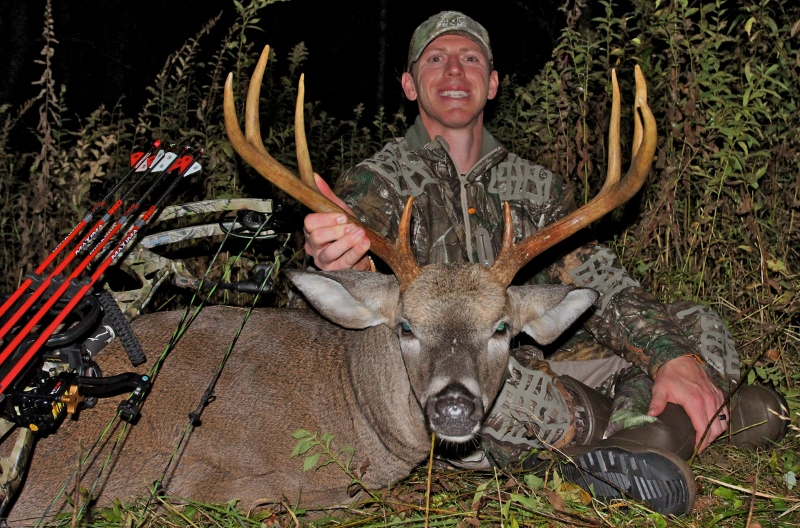 If I wasn’t before, certainly I am now. A firm believer that patience and persistence along with hard work and commitment make the reward that much more gratifying when a plan finally comes together in the whitetail woods. Without having harvested a single buck at home, in North Carolina, in over ten years I was beginning to think that all hope was lost and I was simply fighting the inevitable.

However, after refusing to give up or quit I decided it was finally time to shift my focus on trying to manage and harvest a mature whitetail at home in the Blue Ridge Mountains of North Carolina. I had one farm in particular that my dad and I had been strictly managing for three years and had continually been passing smaller bucks on each season.

After hanging several Reconyx cameras in two main portions of the farm, it was evident that the strict management had paid off BIG. I had seven or eight shooter bucks on the farm and one in particular that really had me excited about the upcoming season. He was a really wide eight-pointer that I knew was at least four or five years old.

Knowing that the buck was living in one particular area of the farm and continually getting daylight pictures of him all summer and into opening week of season, I was chomping at the bit to lay eyes on him and hoping even more to harvest him.

The first week passed and no luck or sightings. It wasn’t until the second week that Jason and I finally laid eyes on him at 55 yards and sure enough I rushed my shot and missed him badly. After a verbal scorning from Jason and disbelief by me, we decided to back out for a week or so. Two weeks later after bribing Chris Ward from Legends of the Fall TV to film me, we returned. After much of an uneventful afternoon, out of nowhere, I looked up and there he stood at 23 yards about to enter the same field. After making his way to 18 yards broadside, I attempted to turn to draw my Bear Bow and the stand popped. Off he ran, once again and yet another verbal scorning.

After two blown opportunities I was ready to hang it up and waive my white flag. I thought to myself there’s no way I could possibly get a third chance at a mature buck of that caliber. Deciding to give it one last stab, Jason and I headed back out on the evening on October 11th. It was cool and the wind was perfect. Not thirty minutes into the hunt we saw a NICE 130 class buck horning a tree at 90 yards and thought this could be the day.

As the evening faded away to no prevails, we decided to pack up and head out. Just as we began to pack Jason noticed movement at the edge of the field. It was him; the big wide eight and two smaller bucks had made their way into the field. As they began to work closer Jason advised me that he was out of camera light and the footage wouldn’t be good at all. In awe and completely speechless that I was about to get another chance at this buck, I advised him to hit record as I wasn’t about to let him walk off a third time.

At 35 yards, I drew my new Bear Agenda 7 and let it fly. Unfortunately, I hit the deer back and we decided to back out and give him time. After watching the footage and conversing with several others, we felt confident that it was fatal shot and elected to try to recover him that night. Surprisingly, he didn’t make it 75 yards and expired. Finally, after ten years I was sitting behind the buck of a lifetime. What a bittersweet ending and exactly what Whitetail Fix was founded upon. ~MATT~