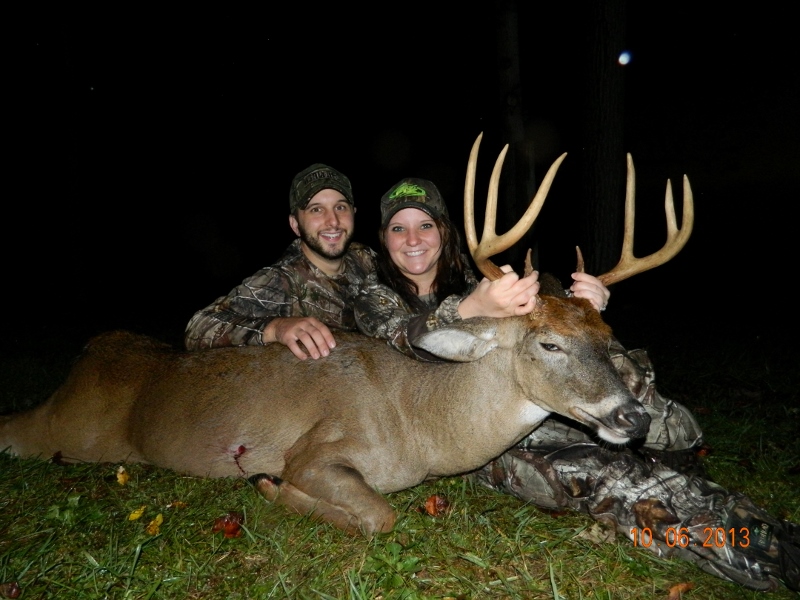 The story of the buck we called “Pitchfork” actually began in September of 2012. With the purchase of a new farm and establishing some new food sources we were sure to eventually strike a little luck! Speeding up to July 2013 the hunt for Pitchfork began. After working hard all summer planting some killer food plots from our friends over at Triple Advantage, the trail camera pictures really began to stack up. One buck in particular was on our radar and it was the deer my fiancé, Allyson, said she was going to hold out for.

After spending countless hours watching my clover fields through a spotting scope, I felt pretty confident that with the right winds Ally would finally get the chance to harvest her first ever buck. The first several days of season went by and the winds were wrong, all we could do was watch from a distance and hope tomorrow the winds would change. Four hunts passed with encounters but for miscellaneous reasons no opportunity was presented.

Finally, on October 6th a huge front was coming and as we suspected he showed up in time with all of the pieces falling together. Right as last light was rapidly approaching he finally committed and presented Ally with the shot she had been waiting for. With the release of a perfect arrow and a massive blood trail on the ground, Ally struck a little luck and got her “Whitetail Fix”.  I couldn’t be more proud of her and I wish her many more successful hunts! I am very thankful we get to share these memories together that will last a lifetime. The true Whitetail Fix!