Patience, persistence, and a lot of luck !

The 2013 season has been one of the toughest on record for most.  Although it has been an amazing season for me, I think about why it has taken until December 12th for me to finally punch a tag.  After a terrible EHD outbreak in 2012 our deer numbers are way down.  I had a few bucks I was interested in but for the most part, it has been a rebuilding year for me.  A “rebuilding year” is not the ideal term when we are attempting to film Season II of “The Whitetail Fix”.  To say I have had some ups and downs, would be a huge understatement.  I’ve had some terrible luck; however, I have also had encounters with some amazing “up and comers”.  Without disclosing too many details, I have also encountered some shooters but for miscellaneous reasons never sealed the deal.

After being persistent and patient throughout the season, an approaching storm front after the rut created the final ingredient for filling my tag… luck.  After seeing one of my shooters, I had brushed in a blind on a cut corn field bordering a Triple Advantage food plot.  With Steve by my side running the camera, we had been in the blind all of 10 minutes when the buck I called the “Laid Back 9” stepped onto the playing field.  He stayed well out of range giving me time to make a very tough decision.  Do I shoot this beautiful mature buck if given the chance, or wait on my target deer?  After discussing dilemma with Steve, I decided to shoot if given the chance.  About as quickly as I made my decision, it seemed to no longer matter when he left the area.

As luck would have it, approximately 45 minutes later he showed back up but this time he was well within range!  I launched what I thought was a perfect 30 yard shot from the Bear Agenda. While celebrating, my heart sank as we watched a coyote traveling in the same direction as my arrowed buck.  Due to extenuating circumstances (coyote) and confidence in my shot, the track was on.  Long story short, the coyote pushed the deer forcing me to give up my search. After a long night, we were back on the blood the following morning.  The trail had tapered off and taken me to the neighboring property which happens to be the location of a one room Mennonite school.  As I started to get that sinking emotion we have all experienced, one of the young school kids waiting for class to start approached out of curiosity.  No sooner did I give my reason for being in the area, the little guy stumbled across the blood trail. Before I knew it, 15 determined little trackers were standing over the top of the “Laid Back 9” 50 yards from the school!!  Seeing the smiles and excitement on their faces definitely added to this experience.   With a little patience, persistence, and a lot of luck… I got my Whitetail Fix! 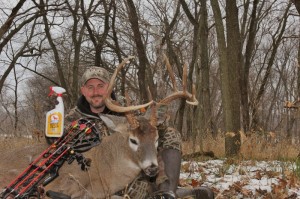