The Hunt For “Lucky” 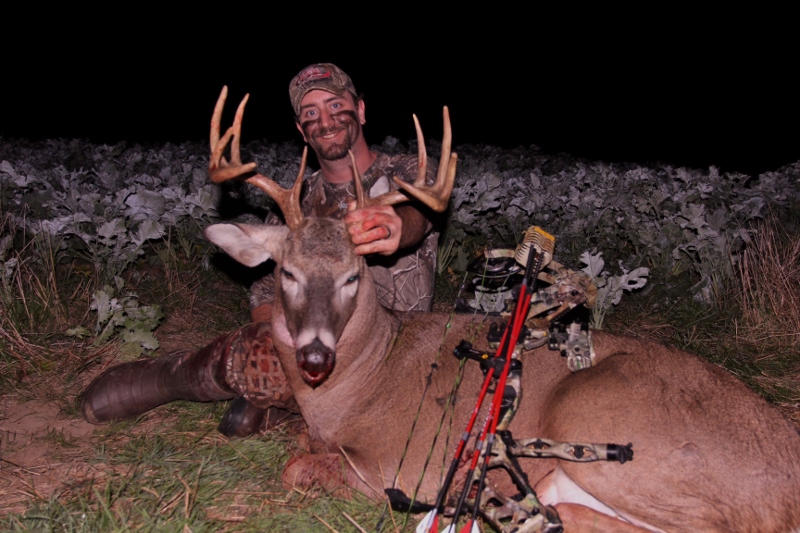 The hunt for Lucky began on September 16th, opening day in Kansas. Ditty had his bow in hand and I was behind the camera. Just before dark, Lucky stepped into range but with a lot of leaves still on the trees, we could not get a clean shot.

On October 6th it was my turn with my Bear Motive in hand to try my luck. Just like clockwork Lucky steps out at 40 yards from our stand. With my Motive in hand, I draw and shoot. My arrow misses it’s mark and sails just over Lucky’s back. He runs off and what happens next is one for the books. After five minutes he finds his way back, not knowing what had spooked him. I take my draw again, but for the second time I miss, Lucky had ducked my arrow again!

After beating myself up all week, Ditty and I head back to Kansas on October 12th. A huge cold front had hit the Midwest and knowing this we had a feeling old Lucky would be up and on his feet. After one hour in the stand, buck after buck came to the food plot below us. Nine bucks total had made their appearance, but no Lucky. Light was fading fast and with ten minutes of Camera light left Lucky steps out. As he closes the distance, Ditty and I are ready for him. Lucky stands at 25 yards, quartering away. This time I draw back my brand new Bear Agenda and cut it loose. Third time was a charm, the arrow hit gold and Lucky went down after 30 yards!

Staying persistent paid off, as Lucky will be one of my most memorable deer hunts ever. It is not every day that you get so “Lucky”.