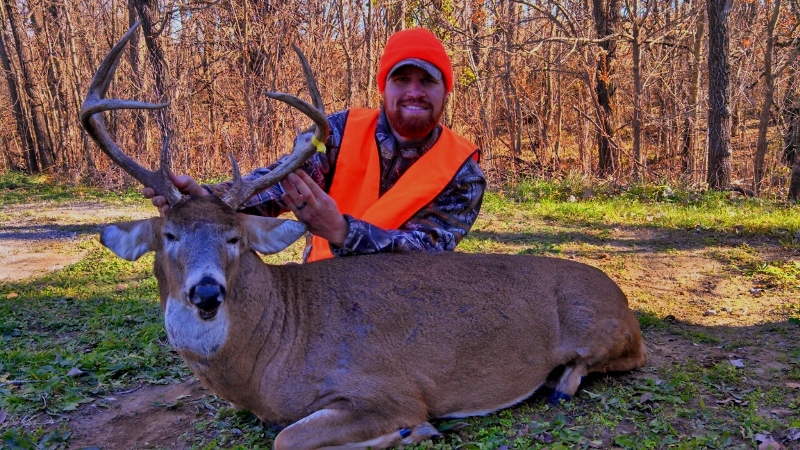 Thus far, my season has had several ups and downs.  Worm and I had some early season success with his buck harvest in early October, but that’s about it.  We have hunted at least 3 times a week since the beginning of season and show no signs of slowing down.  We have seen more shooter bucks while hunting than ever before but couldn’t close the deal.  With the rut approaching, we were hoping our luck would change.

The first part of bow season in Missouri came and went, and it’s now rifle season.  All we can hope for is all our shooter bucks hunker down and if they do decide to come out, it will be in front of our stands.  Well that didn’t happen because opening morning our biggest buck was killed by the neighbor.   With everyone’s rifle hunting success, I was stuck at work skinning deer.  This is definitely a good problem to have considering I’m a taxidermist.

Monday morning came around and it was time for me to get to the woods with a rifle in hand.  I knew of a spot that I had been watching several does.  I knew it was just a matter of time before a big buck would show up.  My good friend Jeff was hunting the same property that morning; he was down low in the creek draw and I was up in the standing bean field.  If any deer would come through, one of us would get a shot.  Well, I was the lucky one that morning because I spotted two bucks and a hot doe bedded down at least 400 yards away.  I spent the next two hours stalking these deer.  I used a wooly, grown up fence line as cover and crawled close to 500 yards to get downwind of the deer.  I closed the distance slowly on the last area I viewed the group, but there was no deer to be seen.  Knowing the deer had no reason to get up, I hung out on the field edge and waited them out.  After an hour of glassing the beans, I finally caught a glimpse of the smaller bucks rack in the beans.  A few minutes later a spotted the doe, and then the buck. He looked huge and he was only 100 yards away.

The doe started feeding my direction and the big buck was hot on her trail.  As they closed the distance, I knew my luck was about to change.  Stopping broadside at 70 yards, I pulled the trigger and my first deer of 2013 was on the ground.  Jeff came up to meet me after hearing the shot and identified him as the buck he missed with his bow just one week earlier.  He’s an awesome whitetail for sure and one I had to work hard for. No matter how long or tough your season has been, don’t give up because your luck can change in a matter of minutes.  With one buck tagged and my “fix” achieved, I am patiently awaiting the 2nd Missouri archery season.  The only thing better than one “fix” is two, now go “get yours”!