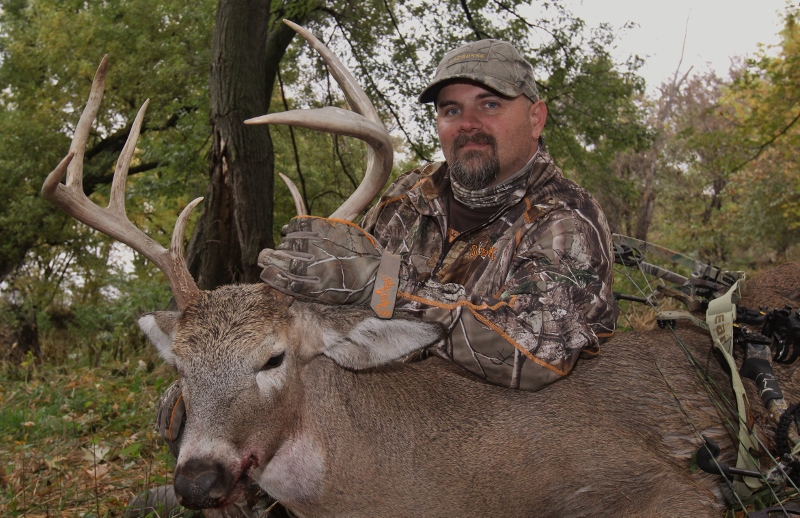 After watching the weather for several days, Mother Nature positioned the perfect wind to access and hunt one of my favorite stand locations. Due to Jason Bowers being in town to film Chuck and Chuck’s limited time to hunt (farming duties), I was in need of a cameraman.  Like always,  Jeremy “The Worm” Borges stepped up to the plate and volunteered to run the camera.  After getting a late start, we had some concerns returning to this particular set due to the corn being harvested.  Fortunately, Worm and I were successful making it to the stand without bumping any deer.

I had only been settled in for about fifteen minutes when a couple of young bucks entered the field.  While glassing these bucks feed, I noticed what appeared to be a mature eight bedded in the field.  I’m assuming being with the “Worm”, we must have crawled in undetected.

After studying the buck and some discussion with Worm,  we determined he was a shooter if he presented a shot.  Very rarely do I have luck on my side; however, it was not long before he decided to get up and feed.  The buck worked his way into “Bear” range and I let the Carbon Express fly.

Unfortunately, my poor luck returned in an instant as I watched my Rocket Hammerhead miss its mark.  I knew immediately the shot was too far back.   I’ve been here before and knew I would have to give this buck some time in order to have a successful recovery.

After a brutal night attempting to sleep, I rallied the troops anticipating a long track.  It was quite the opposite, I recovered my buck within 10 minutes !!  He had bedded down approximately 100 yards from where I last seen him enter the timber.  Testament to the old adage, “when in doubt-back out”.  Big thanks to my fellow crew members.  It was great having Chuck, Jason, and Worm being involved with me getting my “FIX” !!!!!!!!!!!!!!!!!